How to Measure Canopy Stomatal Conductance.

Conductance is the ease with which water can transfer from the plant to the atmosphere with higher values indicating easier transfer. Canopy conductance is a fundamental parameter in plant hydraulics and its understanding is important for plant water relations.

Why is canopy conductance important?

Canopy conductance measurements can be used to understand plant physiology, water relations and hydraulic architecture. Canopy conductance can also be used to gain insights into energy exchanges between vegetation and the atmosphere as well as to identify ecological interactions and evolutionary adaptations.

The inverse of conductance is resistance. Therefore, knowledge about canopy conductance can be used to gain insights into resistance of water flow within and from plants. The most important variable influencing canopy resistance is stomatal opening where open stomata offer less resistance and partially closed stomata creating higher resistance. 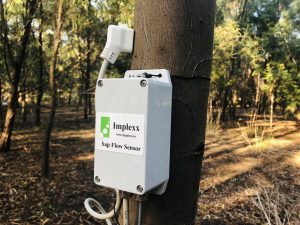 An Implexx Sap Flow Sensor and an ATMOS 41 Weather Station is required to measure canopy conductance.

The Implexx Sap Flow Sensor is needed to measure water (sap) flux within the plant.

The Implexx Sap Flow Sensor is installed on the trunk or stem of the plant or tree. Typically, the sensor is installed lower on the trunk beneath the crown. However, some experiments or hypotheses may test canopy conductance at various locations along the trunk such as upper versus lower branches or northern versus southern aspects.

The weather station should be installed as close as possible to the measured plants while still following standard protocols on where to install a weather station (i.e. in the open and away from obstructions).

Here is how to calculate all the parameters in the canopy conductance equation:

Canopy conductance of the “average” stomata.

Köstner proposed a method to calculate the canopy conductance of the “average” stomata across the entire canopy (Köstner et al 1992, 1996, 2001). Total water vapour transfer conductance (Gt) is defined as:

Researchers must carefully decide whether Gc or Gt, or both, is more appropriate parameter for their experiment and hypotheses. The interpretation of results will likely differ depending on whether data has been analysed via the Gc or Gt equation. As an example, below is presented a data set from 30 days of measurement for a 1.5m tall, potted, lilly pilly (Syzygium paniculatum Gaertn.) sapling growing in a common garden, Melbourne, Australia during summer. The data set includes sap flow measured with the Implexx Sap Flow Sensor, weather data measured via the ATMOS 41 Weather Station, and Gc and Gt calculated via the above equations.

Figure 1 is an example set of data over 7 days for sap flow, Gc and Gt. All variables show a cycle where maximums occur during the day and minimums at night. However, there are differences when maximums occur during the day. During the night, Gc is consistently low or zero whereas sap flow is relatively high during the early night and Gt is relatively high during the latter portion of the night. These differences may be related to physiological processes such as stem refilling or nocturnal transpiration. However, further measurements and analysis are required for a better understanding. 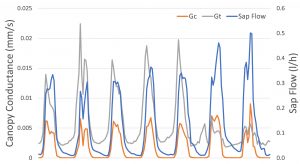 Figure 2. The relationship between VPD and canopy conductance calculated with the evapotranspiration equation (A, orange) or Köstner equation (B, blue).

Figure 3. The relationship between solar radiation and canopy conductance calculated via the evapotranspiration equation (A, orange) or Köstner equation (B, blue).